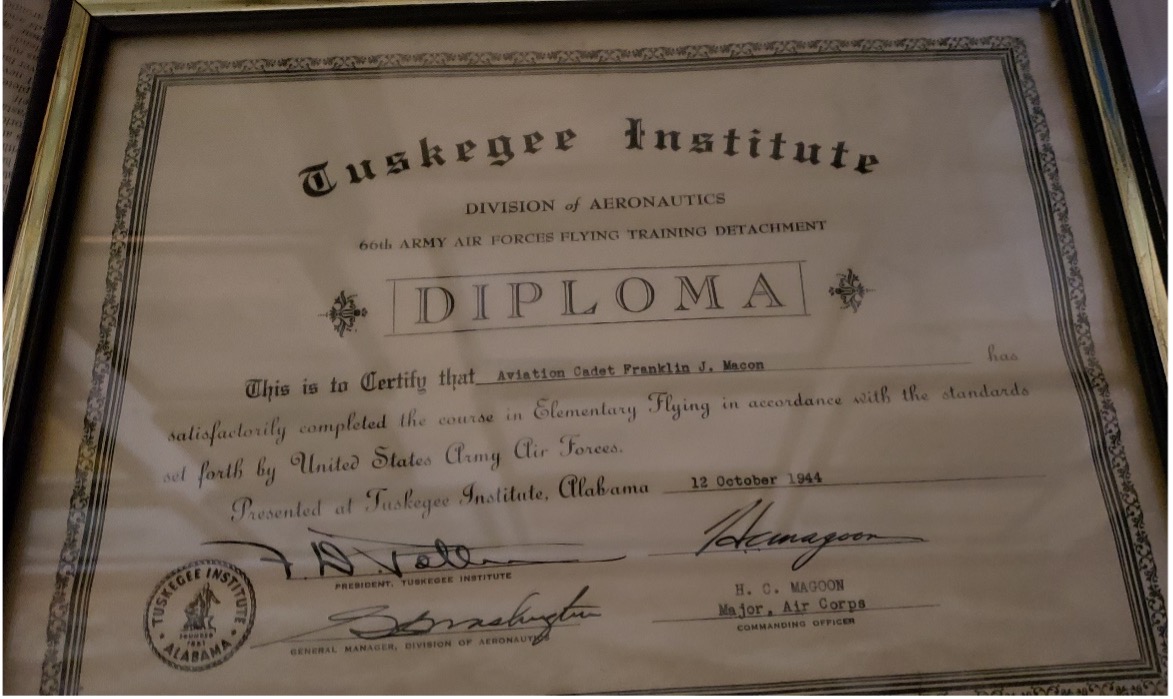 Why you ask? Why isn’t Frank’s name on the graduation list for his class 45A? Here is the story.

As you know, everyone’s path is different. A couple of days before graduation, Frank went up flying with a head cold. He always said, “I should have gone to the dispensary.” His graduation uniform was even hanging in his locker.

Frank didn’t go to the dispensary; he went flying.

That day, Frank went up in the air. He did some maneuvers to include a roll. He went up and, “POP!” Both eardrums burst. Blood everywhere. That sent Frank to the hospital at Scott Field for almost a year. During that time, WWII ended.

To get his hearing back, the military sent Frank to radio code school. When he returned to Tuskegee, they gave him a choice. Join another class so you can walk in a graduation or take your commissioning papers fill them out when you get home and send them back.

You see, Frank did not “Washout.” He had completed all the tasks for graduation, he simply was in the hospital with two blown-out eardrums the day his classmates walked. That is why Frank is not listed.

Before Frank went to Tuskegee, he was already a pilot for the Civil Air Patrol. He was given strict guidance never to tell anyone at Tuskegee you know how to fly. He didn’t. Although Frank would often say a couple of his instructors like Linkwood Williams looked at him in question.

Frank knew he could return to Colorado Springs and fly with the Civil Air Patrol, so Frank decided to head home. He did not care for the segregated military. He was used to his West Side neighborhood, integrated high school, and the Civil Air Patrol that encouraged him to fly.

Frank eventually turned in those papers to receive his wings and commission as a 2nd Lt. He also earned his Civil Air Patrol wings and FAA pilot’s license.